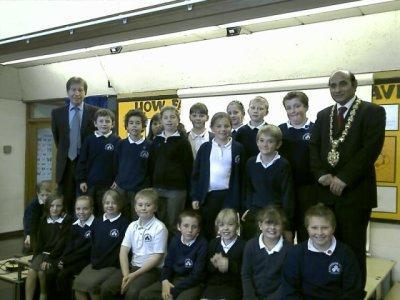 Younger members of the community had a chance to meet Uttlesford district councillors through classroom visits marking Local Democracy Week.

More than 20 school visits linked to the event were arranged involving councillors from all groups on Uttlesford District Council.

Research for the Local Government Association by Ipsos MORI shows just a quarter of 11 to 16-year-olds believe their local councillor is the best person to approach in seeking to alter something in their community.

The same research shows just one in three 11 to 16-year-olds have ever met a councillor or MP, and states those who have "are more likely to express feelings of political engagement and interest".

By bringing politicians and young people closer together it gave the opportunity for each to learn more about the other. Pupils were briefed on the different tiers of local government.

The local democracy campaign is about involving young people in the work of their local councils, helping to highlight young people's involvement in local decision making and the positive role young people play in their community.

He said he and Cllr Sarfraz Anjam, who is also mayor of Saffron Walden, were impressed with the thought-provoking questions asked by the Years 5 and 6 pupils.

Cllr Ketteridge added: "Local Democracy Week is a great opportunity for councillors to meet the youngest members of our community and discuss the issues which matter to them, as well as explaining the role of councils in making their towns and villages better places to live."