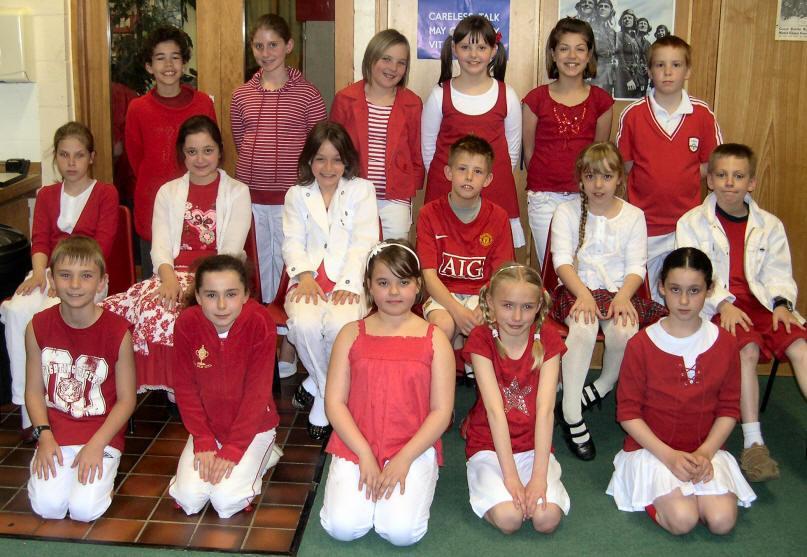 Mrs Callaghan, the head teacher, thought the idea was brilliant "I think dressing up in red and white is a fantastic idea to celebrate St
George's day." She said.
Year 6 researched our saint and they found out that: St George was born in Turkey and at the age of 17 became a soldier of the
Roman Empire. The Emperor Diocletian sent him on many missions, but one day Diocletian ordered George to go and kill all the Christians. George (being a Christian) refused. Diocletian tried to persuade George to give up his faith but he refused and was later beheaded.

The money raised is going to be used to make a garden where Yr 5 and 6 will grow vegetables and flowers.

“The pupils were very colourful!” said Deputy Head, Mr. Hull.
Head teacher, Mrs. Callaghan also said “It looked like the children had been painted with Red and White!”

Year 6 pupils researched that St. George was not English and  had only visited the country once. George died for what he believed in. The Roman Emperor at the time wanted the Roman army member to kill all Christians, but George refused as he, himself was a Christian.

Mrs. Callaghan insisted that the idea to dress in Red and White was all the School Council’s.

Over £200 was raised to fund for seeds and tools for the school’s new garden.

Year 6 have been researching St. George and found out: He was killed because of his beliefs and he was a Christian.

All the money raised from the children will be used to buy supplies for the new Gardening club.

Pupils of Katherine Semar Juniors school paid £1 to dress up in red and white for St George’s day on Wednesday 23rd April.

Head teacher, Mrs. Callaghan at K.S.J, said: “I am very pleased with all the children who have dressed up to celebrate St George’s day.

Pupils of Year 6 have been researching about St George and they found out that St George was the patron saint of England and some more information.

All the money that the school made will go towards a garden that pupils will be looking after.

This day, Year 6 has been researching about St. George’s day. Here are some of the facts researched:

-He was born in Turkey.

-His parents were Christian.

-He grew up to be a Roman Soldier.

-He lived in the 3rd Century.

-He was once forced to kill all the Christians by an Emperor but refused. He said he was a Christian and was killed by the emperor.

The school managed to make about £200 this day for the non-uniforms. £1 for each pupil in non-uniform.