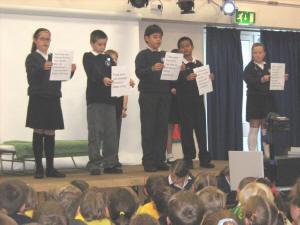 On Thursday the 24th September 6NL had their class assembly.

First of all they introduced us to Science; they told what is in a circuit:

One motor and one switch.

They were telling us about insulators and conductors.  3CW tested ghost balls which lights up when you have made a circuit.

They then moved on to History they told us they have been researching the events that led to the outbreak of war. Firstly, Germany was blamed for the First World War so they were punished, they told us.

We listened to Neville Chamberlain’s speech when he first announced the outbreak of war.

Then we moved onto R.E the Jews faith. They  talked about the covenants that God had made and the Jewish people. They were talking about breaking the covenants and sang a song from Boney M .

Finally they came to their last topic, French. They did a muddled up anagram can you figure this one out??

It was Petit Dejeuner!!

Then the next one was Mr. Lloyds favourite thing in the morning