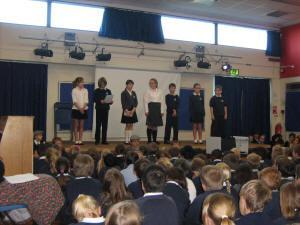 On Thursday 30th September, class 6AH performed their class assembly.
The children showed off the curriculum they were engaged with, focusing on the topic of World War 2.
They created a human timeline of events during World War 2 and then talked in depth about the book they were studying, Goodnight Mr. Tom. Lucy read her character profile of William Beech as part of the show, then Ashleigh and Joshua were hot seated as the characters of Thomas Oakley and William Beech.

The children showed off their art work and sang a song to the packed hall.