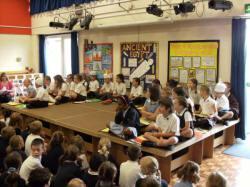 On Friday 18th June, Miss Spearpoint’s class performed their class assembly to the whole school (KSJS) and this is what happened…

Firstly, we were told that they have been studying: Anglo Saxons, Romans and Vikings. We were told a small amount of information about them both.

After that, everyone in 3AS explained who they would rather be and why. They did a fantastic job of that and furthermore, they wrote a recount about their trip to The Anglo Saxon Village, in West Stow, and then they did a extraordinary short play about the Anglo Saxons as well as the Vikings.

As they have been looking at the Vikings, they are going to build some Viking long ships. Throughout the term they have been creating collages of different landscapes with many materials. They will be on display in the art room soon.

In science they have been investigating whether plants – that they are looking after - need sun light to grow healthily. Firstly, they got two 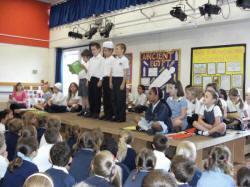 containers. Next, they put the same amount of cotton wool in each of them. Subsequently, they added an equal amount of mixed seeds in to the container. Penultimatly, they added the same quantity of water in them. Ultimately, 3AS put one container in a cupboard ( were there is not any sun light ) and by the window – were there is sun light – and the results were collected. Container 1 (that was in the cupboard) turned yellow and weak. Container 2 (by the window) turned: green, strong and healthy.

Finally, they ended with a song called ‘Do anything but throw it away’ which was sung tremendously then they shared the pray with the whole school.